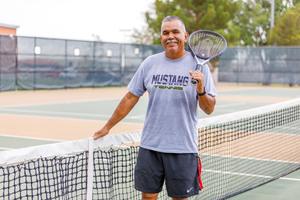 Garcia comes to AHS after five years at Alpine

“I am very excited to take over the reins of the Mustang Tennis program,” Garcia said. “This is such a great opportunity with an outstanding school district.”

Garcia has been an educator for 32 years, all in West Texas. Before arriving in Andrews, Garcia served as head coach of the girls volleyball, girls basketball and tennis teams in Alpine. He was also the Health, Spanish and PE teacher at the high school.

“We are so fortunate to have Coach Ricardo Garcia join the Mustang family as our new Tennis Head Coach,” Athletic Director Jaime Boswell said. “He has vast experience and is very passionate about building winning programs and doing so in the right way. More importantly, he is dedicated to producing future leaders of character.” In the first few months of leading Mustang Tennis, Garcia has led his team to a 4-2 record this fall. Up next, the Mustangs travel to Midland College for a match against Midland Christian on Saturday.

Garcia began his career in education as a teacher and coach in Fort Hancock, Texas. For six years, Garcia coached PE at all grade levels from Kindergarten through graduating seniors. From there

From 2000-2013, Garcia returned to his alma mater of Sul Ross State as an instructor/coach.

Before moving to the field of education, Garcia was a member of the U.S. Army for six years in active duty and the reserves.

Garcia is a double graduate of Sul Ross State University. He received a bachelor of science in physical education and a masters of education in school administration. He and his wife, Selma, have three children, Kris, Jenny and Selena.