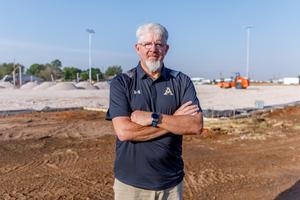 ANDREWS, Texas – It was a special homecoming for David Renfro when he was selected to lead the Mustang Soccer program in its formative years.

“I wanted to come back to my roots in West Texas and be a bigger part of a small town community. Coming to Andrews has been a pleasant experience for my family and I,” Renfro said.  “Being given the opportunity to both teach and coach at Andrews High School is a real blessing and I’m looking forward to the years ahead in the classroom and on the Soccer field.”

Renfro arrives in Andrews after spending the last five years at Clark County School District in Las Vegas, Nev. During his stint, Renfro worked with 7th-12th grade students with learning disabilities. He was also the softball head coach and a member of the wrestling coaching staff.

“We are blessed to have Coach Renfro take over our boys soccer team,” Athletic Director Jaime Boswell said. “He has a passion for building a winning program and doing it the right way, and more importantly, he’s dedicated to producing future leaders of character.”

Renfro began his career in education as a special education teacher at Homer Junior High near Chicago, Ill. He also began his coaching career as he was named the softball head coach.

From 2006-2014, Renfro served as the girls soccer head coach at Brooks Middle School. He led his team to five sectional championships and three state championships during the eight year span.

During the 2014-15 school year, Renfro was a member of the varsity girls soccer coaching staff at Plainfield North High School. The team won the district championship that year and finished the season ranked in the Top 15 nationally.

Renfro was born in Denver City, Texas, and raised in Levelland, Texas, until the fifth grade. He is a 2003 graduate of Lewis University. He received a bachelors of education in Special Education. He and his wife, Dayle, moved to Andrews to be closer to their son, John, and his family.