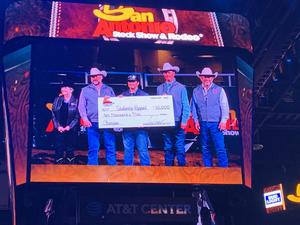 Freshman crowned top shooter amongst 1,100 in the state

During the four-day competition, Hada participated in American Trap, Modified Trap and Sporting Clays against 1,157 shooters. He recorded the highest score over all shooters.

Hada was also awarded the Top Gun award, which is given to the highest percentage shooter, for his 93.5 percent accuracy.

Hada has been competing in NSCA shoots since he was 7 years old and started 4-H shooting events in the 3rd grade. He is a Master Class shooter in the National Sporting Clay Association, the highest classification in the organization.

The Junior Shoot-Out offers qualifying Texas 4-H and FFA members the opportunity to compete in shotgun shooting sports. In order to qualify, participants had to compete in a shooting competition prior to the event.

Hada was one of 16 participants to receive a $10,000 scholarship from the San Antonio Stock Show and Rodeo.