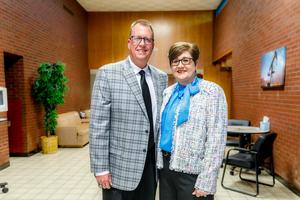 Boswell brings wealth of knowledge to new position at AISD

“We received applications from all over the state and Coach Boswell's experience and accomplishments stood out for sure. However, it was the high praise from each and every one of his colleagues, associates, and supervisors that was most impressive. He is a people-person and advocates for all kids and programs. He's been a successful leader of student-athletes and coaches,” Azam said.

“Coach Boswell’s experience as transformational administrator and as a highly competitive coach in multiple school districts is exactly what we were looking for in Andrews ISD. We can't wait for him to get started. Other great school districts were trying to get him as well and I'm glad we grabbed him when we did!"

Boswell comes to Andrews after serving as assistant athletic director and girls coordinator at Alice ISD in Alice, Texas for the last three years. He has 32 years of coaching and teaching experience working in the Rockdale, Granger, Mathis, Comanche, Sinton, San Angelo (Central HS), and Flour Bluff school districts.

“We are very blessed and grateful to be a part of the Andrews community and school district. Andrews has a great tradition that is second-to-none and we want to try to enhance and uplift that,” Boswell said.

With the split of the athletic director/head football coach position, Andrews ISD is on the forefront of the shift in athletic programs.

“The future of high school athletic programs is going in the direction of two separate positions. You see it at the 5A and 6A levels, and are starting to see it at the 4A level,” Azam said. “Regarding our enrollment growth, sport expansion and certainly considering the ever changing dynamic of AISD athletics, separating the Athletic Director/Head Football positions will definitely benefit all of our student athletes.

Prior to taking the position in Alice, Boswell spent three years at Flour Bluff ISD as the head boys basketball coach.

As a Boys Basketball Head Coach, Boswell’s teams have reached the playoffs 17 times in 22 seasons with multiple Regional Tournament appearances.

Coach Boswell and his wife Kelly, who is an Assistant Principal with Flour Bluff HS, have two daughters, Kharis and Karley and a son Xavian who is a policeman with CCPD.