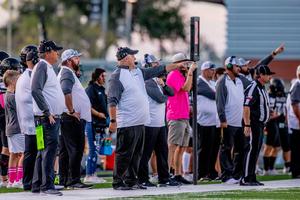 Harvey has history with successful programs in Texas

“We are excited for Coach Harvey to take over the reins as head football coach,” Azam said. “Coach Harvey is one of the well-respected coaches in Texas high school football and has been with many successful programs across the state. We know our kids love him and will be a great fit for Mustang Football.”

Harvey has been on the Mustang Football staff the last seven years, serving as defensive coordinator the past five years. Prior to Andrews, Harvey served as the Athletic Director and Head Football Coach in Plains ISD from 2006-2014.

“Andrews is home,” Harvey said. “Staying in Andrews and this community was what was most important for our family.”

“I am truly humbled and honored to follow Coach Mason in this position. He definitely set a high bar and we will continue to build that winning tradition for Andrews.”

During 2003-2006, Harvey was a member of the Corpus Christi Calallen coaching staff. While there he helped the Wildcats to the UIL 4A State championship game.

With this hire, Andrews ISD has decided to split the athletic director/head football coach position into two separate positions.

“The future of high school athletic programs is going in the direction of two separate positions. You see it at the 5A and 6A levels, and are starting to see it at the 4A level,” Azam said. “Regarding our enrollment growth, sport expansion and certainly considering the ever changing dynamic of AISD athletics, separating the Athletic Director/Head Football positions will definitely benefit all of our student athletes.