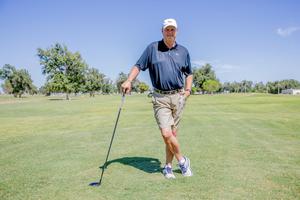 ANDREWS, Texas –  Andrew Correll has been selected to lead the Andrews High School Girls Golf program for the 2021-22 school year. Correll comes to Andrews after two years at Levelland ISD.

“I am very excited for this new opportunity in Andrews,” Correll said. “This is a great district with great vision, direction and leadership.”

“I look forward to continuing the strong golf traditions here with the girl's program.”

Correll has been an educator for 27 years, all but three serving as a coach. Before arriving in Andrews, Correll was the athletic director and head football coach at Levelland ISD. He also served five years as the offensive coordinator at Lubbock Monterey.

“Coach Correll has a background of successful golf achievements including some state championships. Andy knew of the tradition of our golf programs and had a strong desire to become our next head girls golf coach,” Athletic Director Ralph Mason said.

Correll has spent most of his coaching career in West Texas. He began his career in Portales, N.M., teaching Biology and Anatomy & Physiology while coaching football, basketball, track and golf for 11 years.

Correll knows what it takes to be a state champion. During his 24 years of coaching, Correll has been a part of eight state titles and seven individual state championships.

Correll graduated from Eastern New Mexico in 1996 with a degree in Biology and Physical Education. In 2003, he obtained a masters in Education Administration. His wife, Patricia, teaches science at Andrews Middle School. The couple has two children, Courtney and Kyle, and two grandsons, Cullen and Kasen.