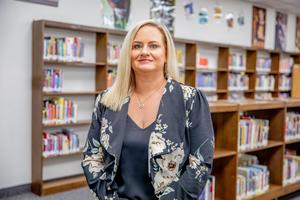 ANDREWS, Texas –  Kristin Ross has been named an assistant principal at Andrews Middle School for the upcoming school year. She comes to AMS after spending five years at Dr. Lee Buice Elementary in Odessa.

“I have always heard fantastic things about Andrews ISD and my family and I are beyond excited to be Mustangs!” Ross said. “I strive to foster the natural creativity of our teachers and I look forward to seeing the amazing things that they do with our students this year.”

Ross spent eight years in Ector County ISD starting as a science teacher at Wilson and Young Medal of Honor Middle School. In her second year of teaching at ECISD, Ross was named Outstanding Teacher of the Year.

“Mrs. Ross was an outstanding science teacher and department head in Odessa,” Lowder said. “I’ve tried to bring her to Andrews as a teacher for several years, but she had moved into an administrative role. When our assistant principal position came open I jumped at the opportunity to bring her onboard,” Lowder said.

Prior to her stint in Ector County, Ross served as a middle school science teacher in McCamey ISD.

“I am honored to join AMS and I aspire to do my part in creating a school environment where students love to learn,” Ross said.

Ross is a 2007 graduate of Sul Ross State University. She also earned a Masters of Education from the University of Texas Permian Basin in 2020. Ross was awarded the Graduate Student of the Year honor following her graduation.